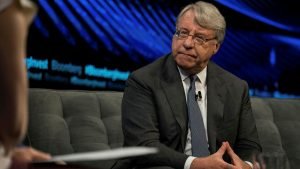 Digital Core REIT (blue line) is down 35% year to date.

Check out: My 10 best Singapore REITs to Buy; The Ultimate Guide 2022 [Updated]

Rising rates is not the only problem

Jim Chanos, is a famous hedge fund manager. He’s most well-known for predicting the collapse of Enron, Luckin Coffee, Hertz and Wirecard. But what I found hard to understand was his reasons behind shorting data center REITs.

According to Financial Times, “This is our big short right now,” Chanos said in an interview. “The story is that although the cloud is growing, the cloud is their enemy, not their business.

Value is accruing to the cloud companies, not the bricks-and-mortar legacy data centres.”

Chanos’s thesis is that these three “hyperscalers” prefer to build data centres to their own design rather than moving into existing ones; and when they do outsource, they typically offer low returns to their development partners.

Chanos also said he believed that the real estate investment trusts were overvalued and in for a period of declining revenue and earnings growth.

In other words, Chanos is betting data centres will lose the very key tenants that are customers to data centres.

This is because these hyperscalers will eventually change their mind, build their own data centers, instead of renting.

The major customers of data centres will become competitors.

This could give data centre REITs a run for their money.

I kind of disagree.

Hyperscalers are taking up more and more data storage space. But they aren’t exactly a big threat to data centres.

Data creation and storage are the key essentials to many governments and corporates. Individuals like you and myself are consuming more digital services.

And this needs a  physically large storage space. In fact, data centres are the key infrastructure that’s going to drive the future of tech.

That’s a huge amount of capital going into real estate.

It’s hard to believe hyperscalers, or any cloud providers would want to spend their capital on non-core businesses like real estate.

On the other hand, institutional investors are also seeing huge demand for data centres.

Last year, Blackstone bought QTA Realty Trust for about US$10 billion, one of the largest data centre acquisitions.

Not only that, American Tower also bought CoreSite, another data centre landlord for US$10 billion.

I disagree with Chanos about hyperscalers eating up data centre market share.

But he did brought out a crucial point here: data centre REITs are overvalued.

And the market is simply “repricing” valuations of data centre REITs.

Don’t forget, data centre REITs, after all, are real estate plays. They are like any other landlords that own properties to rent.

The problem is, over the last two years, data centres have became very popular as the market rides on the massive tech growth story.

For instance, Singapore data centre REITs all along were trading at a low dividends yield. And that’s even even more expensive than Singapore retail, offices and industrial REITs.

Yet, data centre REITs should be treated like any other property landlord — owning real estate that collects a stable flow of rental income. Thus, it doesn’t make sense AT ALL to think of data centers as growth plays.

It’s like what Benjamin Graham says: “in the short run, the market is a voting machine. In the long run, it’s a weighing machine.”

Next, tech stocks have been an absolute murder since the start of 2022.

The thing is, tech stocks’ massive share price gains were the very reason why data centre REIT shares have soared over the last few years.

These tech companies are also the tenants of data centre REITs.

And they gobble as much data storage soace as they are growing is the reason why data centre REITs are in huge demand.

What the market is scared, in my opinion, is many of these tech stocks are largely unprofitable.

They rely on huge debt funding with little profits to show. When interest rates go up, the stock market expects these tech companies to have trouble raising funds.

Which means — why should data centre REITs be trading at a much lower dividend yield than other traditional REIT classes? Today, retail, office and industrial REITs offer a much stable form of recurring income as COVID recovers.

And the big reason is most of their tenants are still in traditional tenants.

These tenants aren’t affected so much by the tech stocks bloodbath.

Hardly so. While both Keppel DC REIT and Digital Core REIT shares have dropped since the start of this year, both REITs should continue to pump out steady dividends.

Recall, these data centre REITs tend to lock in longer leases. There’s visibility. As long as tenants can safely withstand the tech bloodbath, both Keppel DC REIT and Digital Core REIT should continue to pay dividends year after year.

Between both REITs, Keppel DC REIT offers a much safer bet.

54.4% of Keppel DC REIT’s data centres are located in Singapore. I’d say it’s almost impossible for hyperscalers to simply build data centres in Singapore because of our limited land supply.

There’s only so much data storage space in Singapore, yet a growing number of tech companies here. Plus, outside of the US, it’s hard for big tech companies to build their own data centres because of complex relationships with local governments and regulations such as data privacy.

Sometimes, it’s easier to simply approach a data center provider to rent space from than to take years to build one data centre.

Currently, Keppel DC REIT trades at a 5% dividend yield, which isn’t too bad compared to other Singapore blue-chip REITs.

But if you ask me, Digital Core REIT is probably where my heart lies between these two data centre REITs.

Check out: Why this Singapore REIT is Down 16% This Year

And the reason is simple.

Sure, you can argue this is in USD, while Keppel DC REIT is denominated in SGD.

But don’t forget, Digital Core REIT’s gearing ratio is currently at 26% (see below). Digital Core REIT has a much higher growth potential here. Because this newly listed REIT can pump up more properties in its portfolio.

Thus raising its DPU in the near future. Data center REITs have came down largely because of a Chanos short and the tech stock bloodbath.

I don’t think this will have much impact to Singapore data centre REIT’s long-term fundamentals.

In fact, I think data centres are still one of the best ways to get your foot in safely in tech.

I can’t agree with Chanos. He’s being too overly pessimistic about data centre’s market share.

And I know for good reasons since short positions have a higher pressure to take profits faster, just because of the short interest rates hedge fund managers incurr.

Thanks for the analysis! Really well thought out and I agree that Chanos is being overly pessimistic.