Keppel Corp reported solid results for 2021, paying dividends of 33 cents per share Dividend yield rose close to 6%. Is this sustainable? 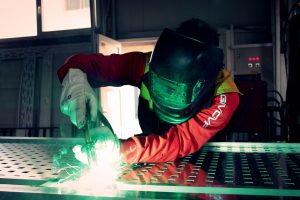 Let’s start off with some solid numbers:

This is Keppel Corp’s latest financial results for 2021. Not too bad, not too bad.

Keppel Corp (SGX: BN4) is one of the most powerful Singapore GLCs.

At S$10 billion market cap, this is one of the world’s biggest oil-rig builders — selling jack-ups to oil majors including Chevron, Shell and ExxonMobil.

A jack-up rig is a massive sea barge with three long support legs that’s jacked down onto the seafloor. This supports the drill that’s used to uncover deep sea oil.

Keppel Corp is a juggernaut in the oil & gas industry

Keppel Corp is relentless in reducing debt. In fact, its leverage fell to 0.68x, down from 0.9x from a year earlier.

Meanwhile, Keppel Corp is also merging its oil rig business with SembCorp Marine. This is going to give Keppel Corp a huge asset boost. It all seems like a big turnaround for this Singapore GLC.

But the story is not so simple.

I’ve watched how Keppel Corp struggled for years because of low oil prices.

And I admit it’s not easy to analyze Keppel Corp — it has a vast number of different businesses.

Even though I was drawn to Keppel Corp’s compelling valuation, I find…

Keppel’s crisis isn’t over yet. Not by a long shot

You see, most of Keppel Corp’s profits aren’t coming from oil rig business.

Instead, Keppel Corp relies heavily on property development and its REIT business.

Even though Keppel Corp reported a solid result for 2021, it struggles to profit from its main business. In fact, Keppel Corp only made S$66 million from selling oil rigs.

The rest of its profits? Property-related businesses: In fact, only a third of its income produced cash flow for Keppel Corp.

True, Keppel Corp wants to create a more recurring income base, which is in line with the company’s Vision 2030. But believe it or not, oil prices still drive Keppel Corp shares.

Since the oil price crash of 2015, this major oil & gas producer shares have continued to slide year after year. Today, its shares are stuck in the bargain bin, trading 48% lower than it was compared to 2014.

And it’s even harder to believe Keppel Corp can fully transform into a recurring income type of business at this point.

The big reason? Keppel Corp continues to compete in one of the most competitive property development industry in the world: China.

Even though Keppel Corp managed to hit strong sales in China, it still has to deal with China government property clampdown, on top of competing with other local developers.

Lastly, Keppel Corp needs to find ways to expand its property portfolio. It’s not easy since Keppel Corp is also competing with other Singapore REITs for high quality assets.

Keppel Corp aims to pay up to 50% of its net profits as dividends. I don’t expect dividends to grow consistently in the future.

You see, the principle behind investing is simple: if you have to wait for a company to turn profits from losses, the stock will take a long time to bounce up. And you’ll be stuck in a terrible position.

In other words, it’s not easy to predict turnarounds like Keppel Corp.