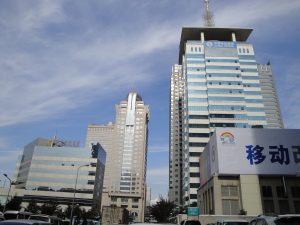 This was despite US trade restrictions on supplying critical components to China.

Even though China has built the world’s largest 5G network, but according to the Wall Street Journal, China’s 5G network only covers 8% of its entire population.

By comparison, this is far lower than South Korea, which covers 25% of its population. And many other developed countries as well.

And it’s not just the phone makers who are benefitting from the shift to 5G. China’s telecommunication operators have to make sure they have 5G coverage available for China’s mobile users.

These big Chinese telco operators are close to hitting their goal of setting up 500,000 base stations to prepare for the 5G rollout across China’s 1.3 billion population country.

The 5G Story No One is Talking About

In fact, China Mobile’s total subscribers are far bigger than all of the subscribers from the Big Three US telco operators — AT&T, Verizon and T Mobile — combined.

Today, China Mobile accounts for 59% of the total wireless market in China.

You’ll agree with me China Mobile is a boring, but booming business.

That’s why long term investors will like this company.

In my opinion, telecom services are an essential to our daily life. And it’s even more so in China nowadays that it’s almost impossible for a Chinese telco operator company to go out of business — even during a recession.

I’ll explain as briefly as I can.

You see, China is one of the fastest growing countries in technology adoption. If you walk along some of the most populated cities in the country, you find yourselves comfortably going cashless most of the time. Furthermore, people are using their smartphones on the train, while queueing for food or even walking — from video streaming to chatting, heavy data is required to do all that.

The No.1 Concern for China Mobile Owners Today

Now, here’s the thing not many people know.

Many US investors, including big funds will be forced to sell down China Mobile because of the political situation.

So what exactly happened?

In November last year, Trump issued an executive order for investors to pull out of Chinese companies that were considered threats to US national security. And that included all of the Chinese telecommunications providers listed in the NYSE.

In fact, people are selling down China Mobile’s shares because of the recent news, forcing the shares to dip lower.

But here’s the other thing, in investing, sometimes it’s more important understanding about the business than knowing what’s going on in the news.

So far, in its latest third quarter financial results during Sep 2020, China Mobile’s total sales hit CNY574 billion, most of it comes from selling mobile services. While its net earnings hit CNY81.6 billion, which remained largely unchanged from a year earlier.

But what’s more interesting is China Mobile’s average dividend payout ratio is only around 45%.

This means China Mobile gets to keep a good chunk of profits to reinvest in the business, while keeping shareholders happy.

Dividend payout ratio is the amount of dividends investors receive from every dollar of net profits China Mobile makes.

These dividends are a crucial piece of China Mobile’s investment story.

Telco providers are known to give stable income that investors are looking for. So the ability to consistently pay a healthy dividend will continue to attract yield-seeking investors.

China Mobile is a great way to ride on China’s growing 5G market for the telecommunications business.

China Mobile has the largest footprint in the mainland with strong free cash flow. As more subscribers turn to 5G, China Mobile will stand to profit from it.

Does China mobile has an economic moat, any competitor and is it easy for consumers to switch telco? What are its main revenue from? subscription or sales of phones, and accessories?

My take on China Mobile — high barrier to entry and regulations. Let me explain, China Mobile is owned by the government, and it’s not easy for any new players to come in. There’s a couple competitors, including the second and third largest domestic players like China Unicom and China Telecom. But so far, China Mobile remains the biggest player. Most of its sales come from providing standard mobile/broadband services including voice and data.

They sell handsets but that’s like 10% of their total sales.

If you like to know more about the key sources of moats for companies, feel free to drop me an email — willie@dividendtitan. More than happy to share some notes with you.

Interesting piece, I’m always looking for high dividend stocks. But I wonder how much capex they need to rollout 5G over the next few years.
And people may not be willing to pay more for 5G anytime soon. Here’s an article about China Unicom shutting down some of their 5G base stations at night due to lack of usage.
https://kr-asia.com/5g-towers-are-consuming-a-lot-of-energy-so-china-unicom-is-putting-some-of-them-to-sleep-overnight