Is Keppel Corp a Good Buy?

Keppel Corp selling its O&M business. Then buying up SPH's property assets. Here's what you need to know about this dominant blue-chip. 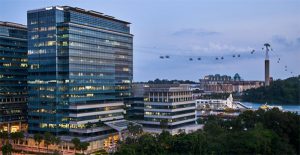 There are some businesses you just cannot buy.

Keppel Corp (SGX:BN4) is one of the most widely respected Singapore blue-chip companies.

Its businesses spanned across shipbuilding, property development, energy and investments.

At one point, Keppel Corp was the world’s biggest oil rig builder.

Its 4.5% dividend yield suggests this dominant Singapore blue-chip is perfect for an income portfolio.

And looking at how things are, Keppel Corp is morphing into a property giant.

First, it’s selling its not so profitable offshore & marine business to Sembcorp Marine.

Then, it’s buying up SPH’s property assets (see below).

It seems like a good move. Some of the more successful businesses are built on properties — Blackstone, Brookfield, American Tower, Prologis.

But my concern is how Keppel plans to achieve all these.

Most of Keppel’s profits will come from property development in China.

In its recent financial results, Keppel sold S$2.5 billion worth of properties, that’s a massive 177% from a year earlier.

More than half of its unit sales come from China. But that’s the thing. Property development can be a “lumpy” business.

Not every year you’ll see a growing revenue graph.

What you might want to know about Keppel Corp

You’re fighting not only against more than 15,000 developers but some of the biggest property players — China Evergrande, Country Garden, China Vanke, Greenland Holdings.

These property moguls are far bigger than Keppel Corp — they can borrow money at unmatched low cost. And they have “first-hand” access to high-quality land.

You don’t want to compete with these Chinese developers.

That’s why typical gross profit margins Chinese developers produce are around 20 to 25%.

Lastly, these companies are many times bigger than Keppel Corp.

It leaves little for foreign players to succeed in the China property sector.

If you ask me, Keppel Corp is facing a challenging business environment.

It’s not that Keppel doesn’t have a sound strategy. The property business in China is simply too hard to survive. And I don’t blame Keppel.

At this point, I believe the weakness in Keppel Corp’s shares reflect the market’s recognition of Keppel’s challenging business environment.

But that’s not the only thing I’m worried.

Keppel Corp has not missed a single dividend pay out since 1989. Back then, it distributed 2.5 cents per share dividends.

It has since grew its dividends.

But in recent years, the company is afflicted with a series of challenges — from a dearth of oil rig orders to transforming its entire business.

It’s probably one of the worst performance for Keppel Corp. If you ask me, Keppel Corp is a business I’ll never own for long.

While people are looking at Keppel as a quick profits, the longer term fundamentals aren’t that optimistic.

Here’s the other thing.

Buying Keppel Corp today is like betting on China developers.

You’re better off buying Chinese developer stocks if you see there’s a big upside in the industry.

Thank you for writing this article sir!

Thanks for this analysis. Helpful to me.

Cannot agree more. That’s why I have liquidated 80% of my Kepcorp shares from 10,000 to 2,000 over the years. Moving away from their key competitive advantage (oil rig business) to another area is a very costly affair as you need to burn $$ to invest in new areas, you do not have the competitive advantage in terms of expertise and IP, increases the risk of failures and you can no longer command abnormal profits – it is really tough!

I agree with you. This pivot is going to be costly. And most of their profits are going to come from their China development projects (through Keppel Land). I’m not sure how they are going to compete with the other local players. I used to look at junk bonds of Chinese property companies. These guys are damn aggressive. Their mid-cap developers are already bigger than Kep Corp haha.