Here's what you exactly need to know about Riverstone's recent share price plunge, after it rallied a massive 400%. 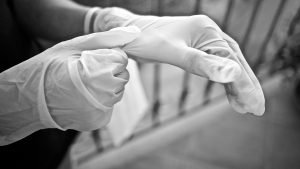 He was always attracted to how atoms could interact with each other to produce different chemical compounds and states of matter.

In fact, he worked as a research and development chemist after he graduated from the University of Malaya.

To a casual observer, Riverstone doesn’t sound like an exciting business at all.

But to anyone watching closely, Riverstone has already sold close to MYR1 billion worth of gloves in 2019. That’s a 12% annual growth rate since its IPO in 2006.

And it has maintained, on average, less than 50% dividend payout ratio.

This means Riverstone consistently reinvests half of its earnings to expand its business. Which helps compounds its dividends.

Riverstone’s 400% Gain is Only Half the Story Told

During its latest third quarter financial results, the company’s sales grew a massive 92% year on year to MYR482 million.

Its gross profits and net profits grew 390% and 408% to MYR251 million and MYR178 million respectively, as compared to last year.

Hospitals, medical clinics and research labs were snapping up boxes of Riverstone’s medical-grade gloves during the COVID-19 pandemic.

And because many glove factories in Malaysia were shut, this drove a huge demand for Riverstone’s gloves.

That propelled Riverstone’s share price by a massive 400% gain earlier this year.

But that’s only one side of the story told.

The market doesn’t like that a COVID-19 vaccine is coming.

This means Riverstone’s huge demand for its gloves will eventually fizzle out .

Now, here’s the problem about selling gloves. The industry is fiercely competitive. And you’ve to fight with hundreds of other glove makers in Malaysia.

Many of them can never scale to a massive size.

For instance, the company sells to big semiconductor players like Western Digital, Hitachi and Seagate Technology.

Simply put, Riverstone’s nitrile gloves are a commodity product. The more factories a company has, the more it can sell its gloves, the faster it grows.

That’s why Riverstone’s gross profit margins are much thinner at around 25%, as compared to other elite dividend growers.

Gross profit margin is basically sales minus labour and raw material costs to produce a piece of nitrile gloves.

Riverstone is hitting investors with their solid financial numbers this year, but the company’s valuation still seems “rich”.

At its current price today, its dividend yield spots an expensive 1.38%.

Its previous historically high dividend yield was 6.5%, earlier in March 2020.

It’s no doubt Riverstone punches above its weight. But as a long-term investor, I’d like to think valuation as a critical piece to a good investment.

This is a fundamentally good company, but I’ll put it aside for now until the price is right.

The Ringgit movement and Malaysia political situation will have a bearing on Riverstone share price growing forward.